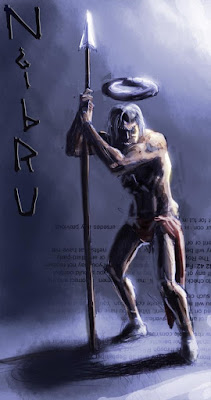 Over on the ConceptArt.org forums there is a thread which has had quite a lot of attention: NIBRU! The perosn who started the thread has a character called Nibru that he asks his friends to draw their own interpretation of. He posted a sketch and a few details of the character on the forum, and asked if anyone would be interested in doing a quick doodle of the character for him.

The response was incredible....

Instead of being met by howls of derision by the ConceptArt community over someone asking for 'free' work, everyone responded positively and posted their own versions of this character. Some were simply doodles, some were more elaborately finished paintings, some were accurate to the character description, some were humourous interpreations. Amongst the people posting their work in this thread were some of the premier concept artists working around the world, students, hobbyists, and even some people who had heard of the thread from Facebook and other places and just wanted to have a turn.