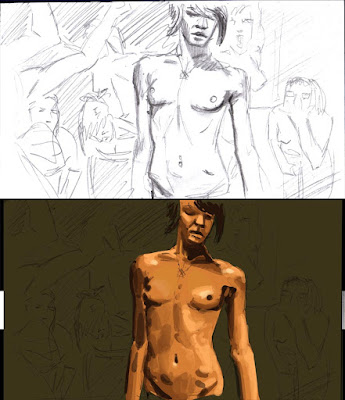 
As in previous weeks, I have been doing a lot of observational drawings from Suicide Girls Photoset of the day. This is the first time I have ever tried to digi-paint from photoref. This painting took about 15 mnutes ans then I abandoned it (I had to get to work!) But I have learned that painting from photoref requires a lot of discipline, and after a while I became too dependant on the photo and my painting became even cruder than usual. Eye-dropper tool makes assessing the colours with your eyes harder too, and I will avoid it's usage in all future endeavors.